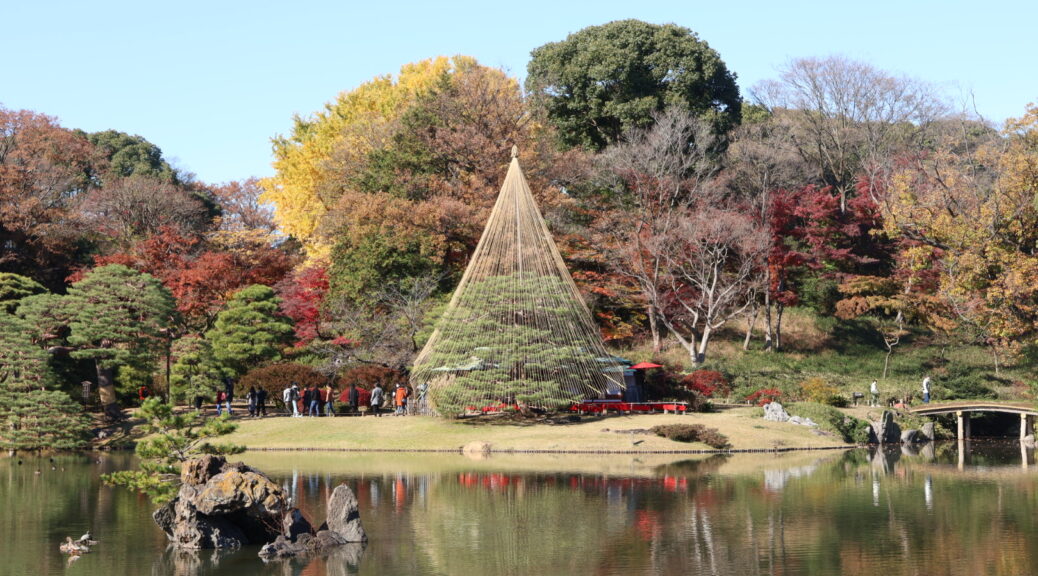 Took Hokuriku Shinkansen to Tokyo direct in less than 3 hours. There were plenty of vacant seats in the non-reserved cars till Nagano.

Stayed in Shibuya – one of our fav areas and keen to find out how it might have evolved after new buildings like Shibuya Scramble Square have sprung up in the last few years. Overall it was as busy as in the past.

Our first visit. Although Koyo has slightly past peak, there were plenty of local visitors on a normal weekday.  It is a beautiful landscape garden with well designed trails, interspersed by streams, ponds and bridges.  Stayed there for 1 hour+.

On the next day we headed to Kamakura and Shonan – our fav spots outside Tokyo metropolitan.  It happened that a festival was held in the Tsuruoka Hachiman-gu, where we found many youngsters in school uniforms, apart from many locals.

In the evening, met up with local friends who had arranged a Japanese dinner in a traditional restaurant in Omotesando, which served produce from Niigata Prefecture.  It was such a nice reunion in Japan post-covid 🙂 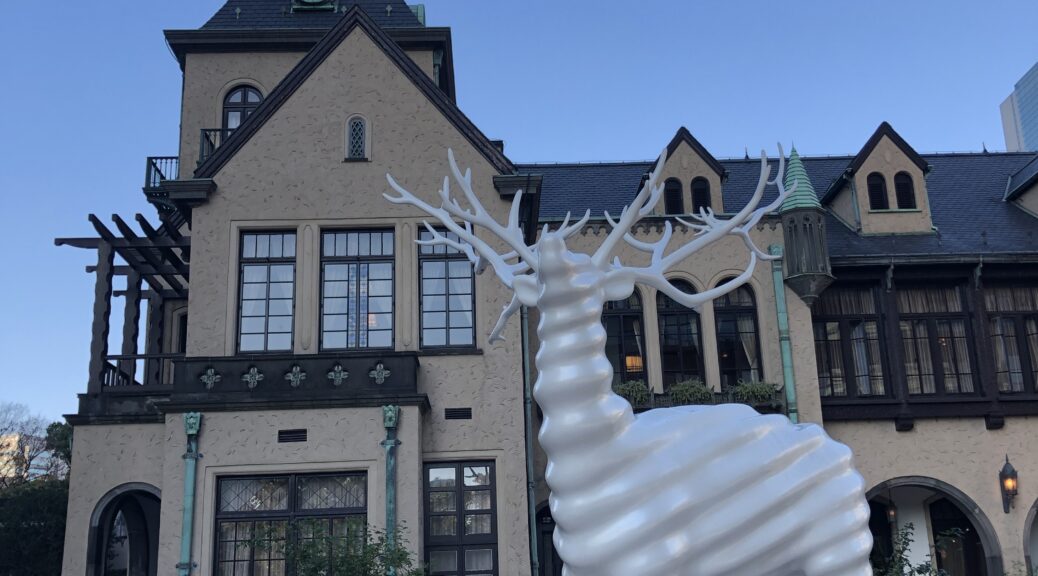 On the next day we visited the teamLab Planets in Toyosu.

I had visited the teamLab Borderless in 2019, but sadly it was closed in Aug 2022.  Though we already possessed e-tickets, we had to line up with others which took about 15 min before admission.

All visitors were required to remove their shoes and socks to be stored in large lockers. Short pants were provided (for free) to access corridors and rooms filled with water up to shin level.  Amazing visual effects were deployed.  We enjoyed it and stayed for 1 hour+.

Dropped by it after lunch.  Much to our surprise, roses were blooming, as in early May 2018 when we last visited.  Strolled around Akasaka – it seemed more boutique hotels have sprung up, apart from new and old familiar shops.  It was amazing that one local patisserie still attracted a long line – as in the past. Went for a coffee break in a nearby local cafe.

Returned to Hong Kong on the next day.  Overall, it was a great holiday and Japan has resumed normal in many aspects. 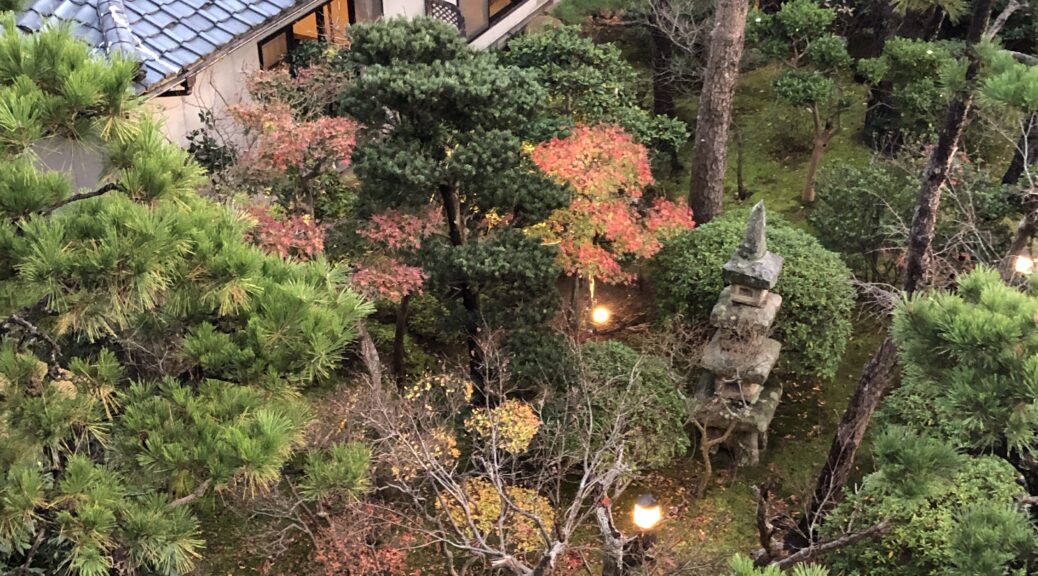 Before checking in onsen ryokan, dropped by a local cool coffee shop in Sakai for a break.  Customers have choices of coffee beans from various locations in Central/South America, Africa etc.  It’s run by a young guy.

Our first stay. Picked a 100+ year old onsen ryokan and stayed in a garden suite of Kangetsu Tei.

Calligraphy by former Prime Minister of Japan, and gift from Taisho Emperor are also on display in public area. 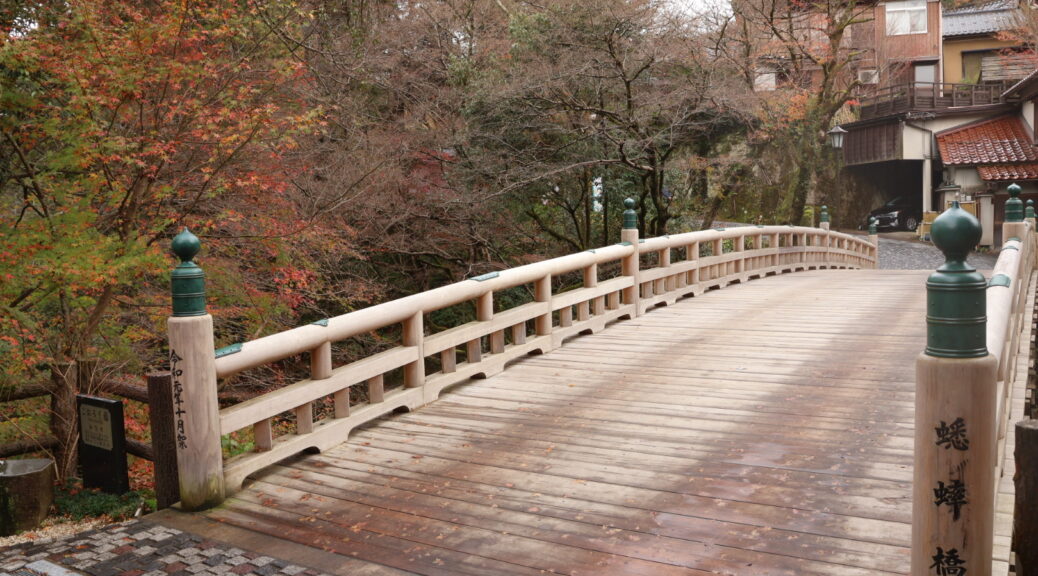 On next morning we drove to Kanazawa, but first we dropped by Kakusenkei, Yamanaka onsen about 40 min away.  It was smooth driving on national roads in light traffic.

Trekked along a short trail of about 1.5km at the bottom of the gorge pleasantly.  We crossed the gorge via the purple metallic Ayatori bridge and returned via the traditional Korogi bridge (in featured photo).

From time to time we bumped into locals – babies, kids to seniors. Guess some might be staying in the ryokans of Yamanaka onsen.

The stream was in turquoise in some sections, dotted by fall foliage here and there.

As it started to rain, we drove to Kanazawa and returned car. 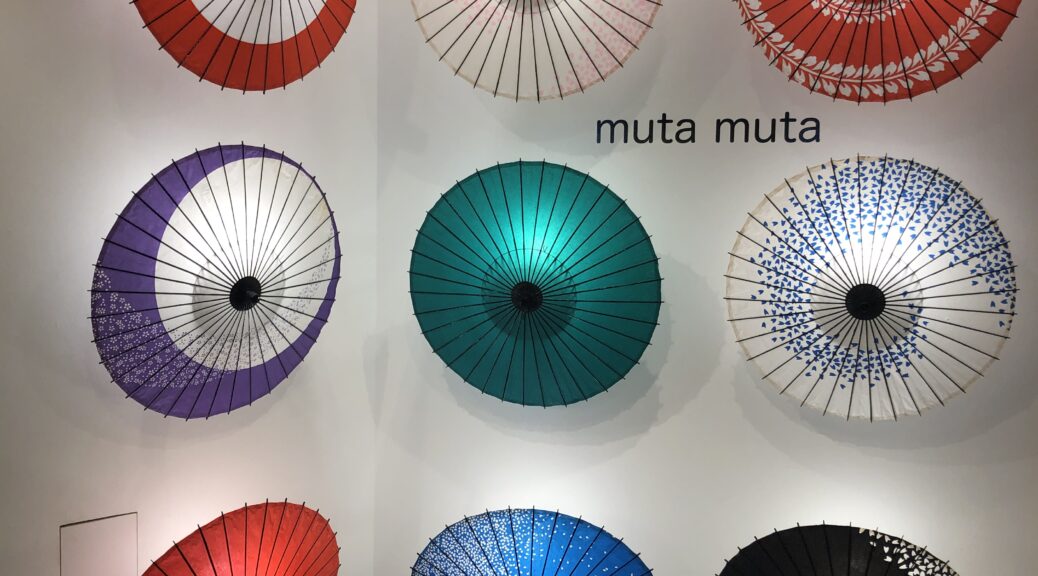 Checked into Hotel Nikko Kanazawa (2nd stay in this hotel) for 2 nights. Unfortunately, it’s been raining day and night with occasional thunderstorms, apart from getting chilly. Thus we were less keen for sightseeing.

This was our 5th stay in Kanazawa.

Visited the Omicho market before lunch time.  It’s good that it was as busy as in our previous visits.

Had a slightly early lunch in our fav sushi shop before line appeared.

While strolling around the market, couldn’t help stopping by for fresh sashimi 🙂

When rain stopped for a while, dashed over to the Kuromon store opposite to the market. Enjoyed coffee and macha cake in a local tea house. 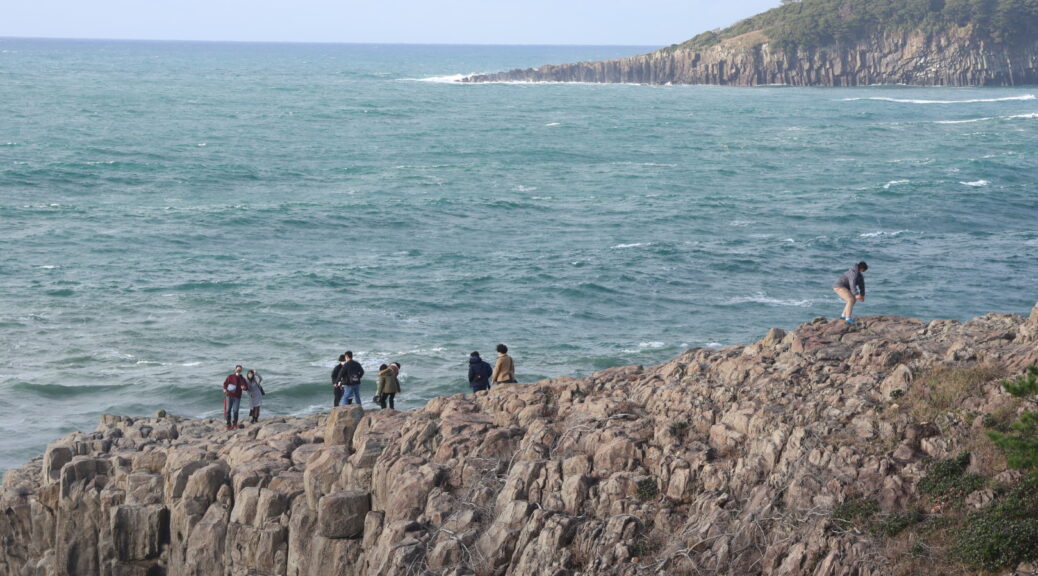 On next morning took JR Thunderbird express train to Fukui city in abt 80 min direct.  There were plenty of vacant seats on the reserved cars. Btw, the train staff onboard did not ask for train tickets for validation – unlike in the past for reserved seats. Also, rain and misty clouds dominated the landscape when entering into Fukui Prefecture – similar to our last three experience passing by Fukui.

Meanwhile, overhead tracks (for Shinkansen trains) are being built when entering into Fukui Prefecture, while the JR Fukui station is being expanded for the future Shinkansen station. Re the JR West magazine onboard the train, it has been planned that the Hokuriku Shinkansen would extend to Tsuruga (from Kanazawa) in 2024.

Picked up rental car and drove towards Echizen Kaigan in rain (in about 30 min w/o much traffic) on Sunday morning. Fortunately, the rain stopped when we reached the coast and before turning south towards our first stop.

The pillar rocks are akin to those in Sounkyo/Daisetsuzan, Hokkaido. As it was after fairly heavy rain and still windy, did not bother to climb but went for lunch nearby.

Arrived at a local restaurant overlooking the coast. Ordered 2 kani-don set – kani was seasonal “Seico” kani. Re the staff the Seico-kani and the Kabako-kani are the same, though the former name is used in Fukui.  At the end it took more than 20 min for our 2 sets to arrive.  But the wait was worthy –  the entire bowl of the rice was covered by crab legs and beneath it was a sumptuous amount of crab meat and roe !

It was the best kani-don we ever had !! And it was compatible with the price of a (Kabako) kani-men in Kanazawa-oden. It is good value for money given the great taste and the fact that much manual effort is required.

After such a palatable lunch, we headed slightly further south to watch the Benkai-no-Sentaku Iwa (Benkai’s laundry rocks) before heading northbound to Tojinbo. The rocks look akin to those along the Miyasaki coastline in south-eastern Kyushu, though on a smaller scale.

It took about 30 min to arrive at Tojinbo, passing by the Mikuni coastline when sun rays emerged – much to our surprise but of course highly welcomed.

After leaving the paid parking lot, we passed by numerous restaurants, food stalls, souvenir shops on both sides of a lane before arriving at the coastline where the spectacular cliffs are.  The rocks are in pillar shape similar to Hokojima but of a larger scale with bluffs, as a result of relentless erosion by sea waves. 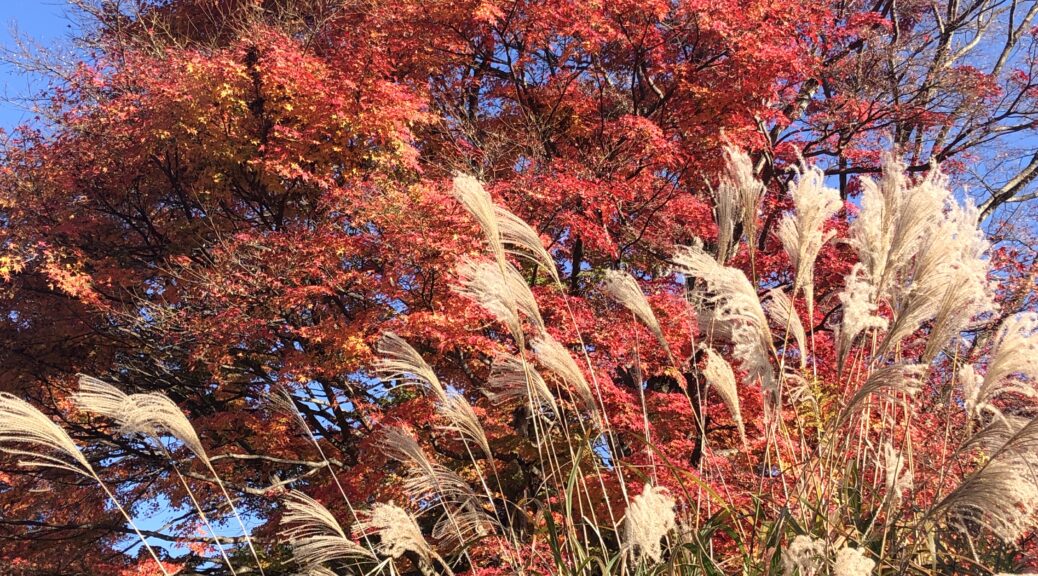 Visited Japan in end Nov after the border has reopened to international tourists. It was a 14-day trip from Kansai to Tokyo via Hokuriku – visiting Fukui Prefecture for the first time.

Landed in Osaka/KIX and it roughly took about 40 min to exit into the arrivals lobby, despite possessing the 3 QR codes generated by the Visit Japan Web, and there was no line in immigration.

Headed into the Osaka/Umeda by limo bus and checked into Hotel Granvia Osaka. To our surprise, there was a super-long line on Sunday evening (maybe due to the GoTo program as most were locals) and it took like 50 min to get our room key on the highest Executive floor.

Had our first dinner in Japan (in almost 3 years) in a local “kappo” in West Umeda. Food was so delicious – esp the tempura items.  Felt a bit sorry for the shop – we’re the only customers in that evening until around 8:30pm when we’re about to leave.

On the next day we took express bus to Arima onsen (our 3rd stay) in 1 hour.  After dropping our luggage in the onsen hotel, we hiked up to the Zuihoji Koen (Park), passing by the familiar temples and the public onsen bath along the way.  There were some visitors – all locals but not crowded. A senior couple asked me to take photos for them and he offered a handshake after knowing that we’re from Hong Kong.

Koyo had clearly past peak – the driver of the hotel shuttle bus told us it was 1 week ago.  We knew it but that’s the earliest timeline we could visit Japan 🙂 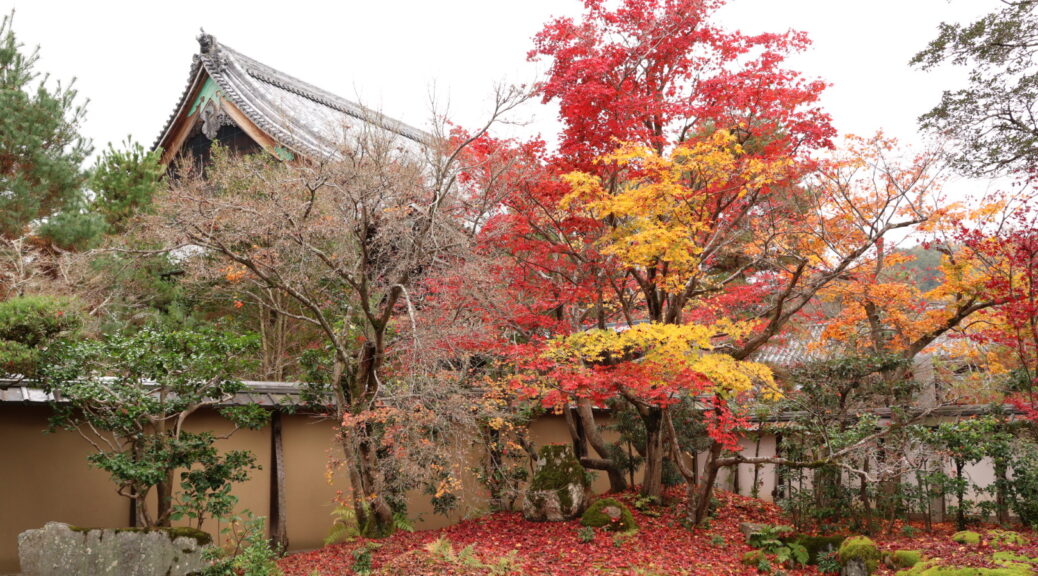 It was raining on the next morning in Arima onsen and Kinki area.  Returned to Kyoto around lunch time by express bus.  Lined up outside our fav sushi shop beneath the Kyoto station before checking in Hotel Okura. Stayed in room facing the Higashiyama area for the first time.  Some famous landmarks such as Chion-in, Nanzenji, Eikando etc could be identified with the help of a brief map on the window pane.

There was a light haze in Higashiyama after rain had stopped.

Had breakfast in our fav coffee shop chain in Teramachi. It was quiet with few customers – unlike its shops elsewhere. Besides, it has a mini-Japanese garden inside.

Dropped by Honno-ji (本能寺) next door, at the back there is a small temple dedicated to Oda Nobunaga and his sword grave.  Honnō-ji is most famous for the Honnō-ji incident – the assassination of Oda Nobunaga. In that incident the original temple had been burned down whereas the current temple was subsequently rebuilt.

Visited this temple in Arashiyama – as recommended by a respected local Sensei.  It stores several national treasures of Japan (photos not allowed), including a small wooden Buddha statue* originated from India, brought to China during the Southern dynasties and finally brought to Japan during the Song dynasty 1000+ years ago.

Though koyo was off-peak in the landscape garden at the back, there were some brilliant spots on its premises.  Visitors were sparse. 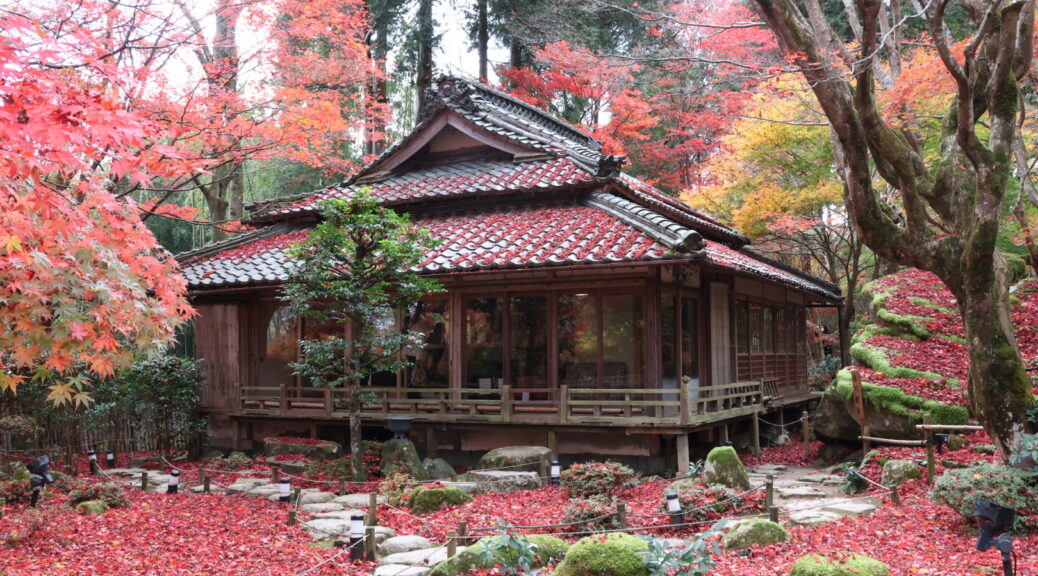 On the next morning we took JR Kaisoku (rapid) commuter train to Kusatsu, Shiga Prefecture (in about 20 min direct). Picked up a rental car and headed to Oike-ji, Koka in about 45 min (< 25km away), due to busy traffic on national roads.

It was quiet and the head monk received and briefed us with a video. The landscape garden is serene. We stayed for less than 1 hour.

drove to this 100+ year old shop whose beef cattle are raised in its own farm. The grilled Omi-gyu (近江牛)  was delicious. The restaurant was quite full and thus we had to wait for a while w/o reservation.

Next we drove to Kyorinbo, which was the most brilliant koyo spot in this visit !!  Re its website it was founded by Prince Shotoku (聖德太子) in early 7th century AD.

There were more visitors though not crowded.

The more brilliant spots were around Hondo (main hall) and opposite Shuin (library).

Out of the blue, it suddenly rained. Thus, almost all visitors sought for shelter in Shuin. After 10 min or so, it was getting heavier and even small round white pellets rained down – our first experience !  Luckily it wasn’t those large hailstone and no one seemed to be hurt.

Next we drove to the canal area of Omihachiman.  Dropped by the Hakuunkan (literally white cloud hall) – in European architecture which now serves as the tourist information centre.  As traffic was fairly heavy along the way, we did not stay for long and returned to Kusatsu. 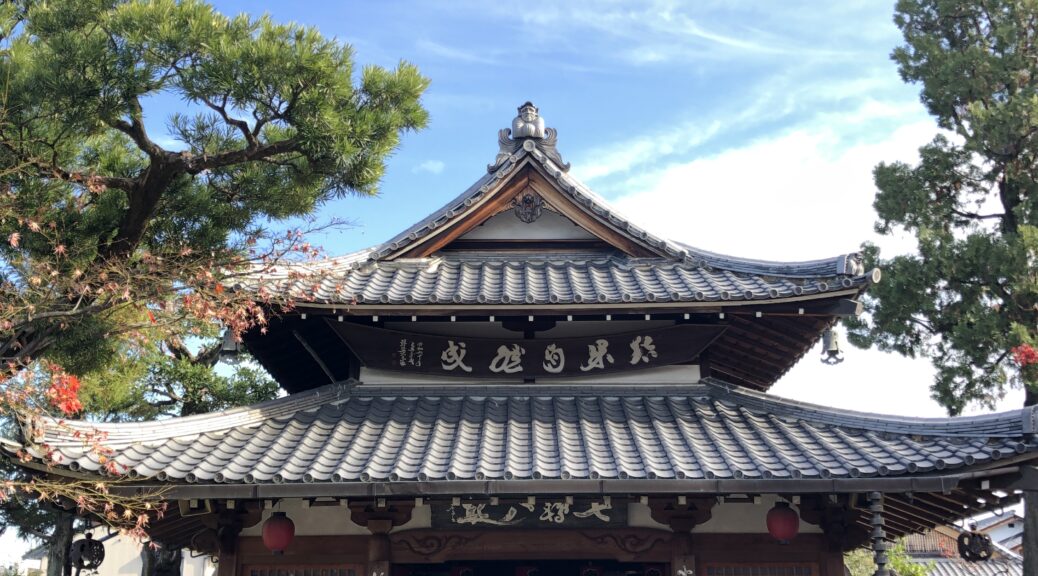 On the last day in Kyoto we visited Kaju-ji (勧修寺) in Yamashina.  Did not stay long as Hondo and other halls were being renovated so a bit noisy.  There were a few visitors that morning.

Returned to Kyoto city to visit Daruma-ji, where there are hundreds of daruma dolls in various sizes.  Unexpectedly on the second floor, there’s a room containing the mortuary tablets of Japanese movie directors, actors, actresses, singers of the last century.

This sums up our 5-day stay in Kyoto in this trip. Overall, it was generally less crowded in Kyoto, though we did not visit Gion nor the Higashiyama area.

Next we’re heading to Hokuriku.